The Bhagavad-gita Museum, officially the Diorama-museum of Bhagavad-gita, also known as the First American Transcendental Exhibition (FATE), is a multimedia art museum located in West Los Angeles, California. Established in 1977, it is dedicated to illustrating the philosophy of Bhagavad-gita and is owned and operated by the International Society for Krishna Consciousness (ISKCON). 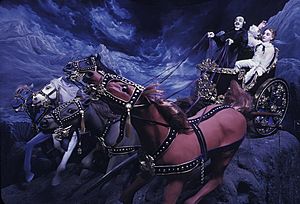 "The Precarious Condition of the Living Entity" diorama

The Bhagavad-gita Museum was inspired by a diorama exhibit developed by Bhaktisiddhanta Sarasvati in the mid 1930s, consisting of dozens of dioramas dedicated to the philosophy of Krishna consciousness. In 1973 Sarasvati's student A. C. Bhaktivedanta Swami Prabhupada, the founder of the International Society for Krishna Consciousness (ISKCON), also known as the Hare Krishna movement, sent a group of disciples from the New York temple to Mayapur, India, to study the art of diorama doll making. After fifteen months of studying the team returned and the construction of the dolls in the Los Angeles site began, the museum finally opening in 1977. The museum is located in West Los Angeles near the border of Culver City, where a sizable Hare Krishna population resides.

For the time, the museum was quite sophisticated: a computer was specially designed to synchronize the exhibition which included lighting, a 16-track sound system, numerous film and slide projectors, and special visual effects. New industrial grade projectors and new lighting effects were installed in 1984. However, this sophistication came with a price, and the exhibit was plagued by computer glitches and maintenance problems falling into significant disrepair by 1995. Starting in 1999 the museum was refurbished, and was reopened in 2001 with modern solid state show controls. Further renovations were made in the 2010s and the museum was reopened in 2016. 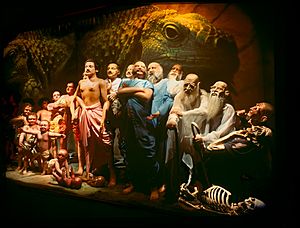 The exhibit consists of eleven dioramas. The almost life-sized dolls in the dioramas are constructed from traditional Indian doll-making materials such as bamboo, rice straw, various clays, and rice husk, using traditional construction, finishing, and dressing techniques. While the display was refurbished over the years, it was not modernized. The dioramas are:

The museum is adjacent to a restaurant serving vegetarian cuisine, and has a gift shop.

All content from Kiddle encyclopedia articles (including the article images and facts) can be freely used under Attribution-ShareAlike license, unless stated otherwise. Cite this article:
Bhagavad-gita Museum Facts for Kids. Kiddle Encyclopedia.