Bialy (Yiddish: ביאלי), a Yiddish word short for biały or bialystoker kuchen (Yiddish: ביאליסטאקער קוכען), from the city of Białystok in Poland, is a small roll that is a traditional dish in the Polish Ashkenazi Jewish cuisine. 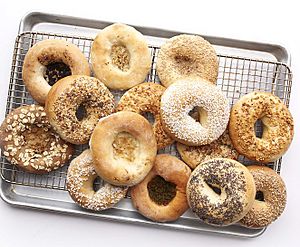 Bialys (without holes) and bagels (with)

A traditional bialy has a diameter of up to 15 centimetres (5.9 in) and is a chewy yeast roll similar to a bagel. Unlike a bagel, which is boiled before baking, a bialy is simply baked, and instead of a hole in the middle it has a depression. Before baking, this depression is filled with diced onions and other ingredients, possibly including garlic, poppy seeds, or bread crumbs.

The bialy was brought to the United States by Polish Jewish refugees in the late 1800s, and became a staple of Jewish bakeries in the Northeastern United States. Bialys became a popular bread and also breakfast for people in New York City, and the outlying areas; especially American Jews. Bialys are commonly baked by bakeries who also sell bagels, however there are differences between the two and the bialy has failed to reach the mainstream popularity the bagel has enjoyed in the United States, and indeed worldwide, for decades. Making bialys in the traditional manner is a time-consuming process, and thus many bakeries now make bialys with machines, as is common with bagels as well. Bialys are considered an iconic food representative of New York City, and can be difficult to find outside that area. However bialys are sold frozen by a number of brands such as Ray’s New York, and others, in supermarkets across the country.

All content from Kiddle encyclopedia articles (including the article images and facts) can be freely used under Attribution-ShareAlike license, unless stated otherwise. Cite this article:
Bialy (bread) Facts for Kids. Kiddle Encyclopedia.