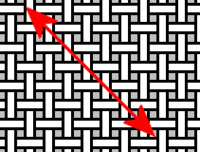 When cut on the bias, woven fabric is more elastic as well as more fluid in movement, compared to the on-grain direction. This helps many types of garment, such as skirts, dresses and neckties.

The "bias-cut" is a technique used by tailors and dress-makers for cutting cloth. The greater stretch in the bias (diagonal) direction of the fabric, helps it accentuate body lines and curves and drape softly. For example, a full-skirted dress cut on the bias will hang more gracefully or a narrow dress will cling to the figure.

Bias-cut garments were prominent in haute couture clothes designed by Madeleine Vionnet in the 1920s. It is still used often in both haute couture and high street clothing. In the Middle Ages, before the development of knitting, hose leggings were cut on the bias in order to make them fit better.

All content from Kiddle encyclopedia articles (including the article images and facts) can be freely used under Attribution-ShareAlike license, unless stated otherwise. Cite this article:
Bias (textile) Facts for Kids. Kiddle Encyclopedia.