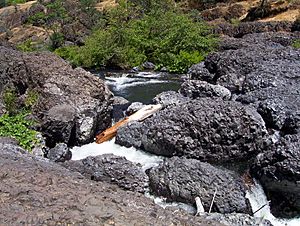 Bidwell Park is a municipal park located in Chico, California. The park was established July 10, 1905, through the donation by Annie Bidwell (widow of Chico's founder, John Bidwell) of approximately 2,500 acres (10 km2) of land to the City of Chico. Since that time, the city has purchased additional land, such as Cedar Grove in 1922, and 1,200 acres (5 km2) of land south of Big Chico Creek in upper Bidwell Park in 1995. Today, the total Park size is 3,670 acres (15 km2), nearly 11 miles (18 km) in length, making it the third largest municipal park in California and is one of the largest city parks in the United States.

Bidwell Park is "divided" by Manzanita Avenue. The area west of Manzanita Avenue is referred to as Lower Park and the area to the east is referred to as Middle and Upper Park. Middle Park extends from Manzanita to a point roughly equal to the upstream edge of the Chico Municipal Golf Course. The noticeable difference between Upper/Middle and Lower Park is the terrain. Upper Park is located in the foothills of the southernmost Cascades. It has steep terrain and shallow soils, and contains many rock formations, including the unique Chico Formation sandstone, Lovejoy Basalt, and Tuscan Formation rocks. Lower Park is flat and level with a deep soil structure supporting a thick canopy of trees which provide ample shade for the visitor. Special rules also apply in the Upper Park and the road is unpaved for much of its length. 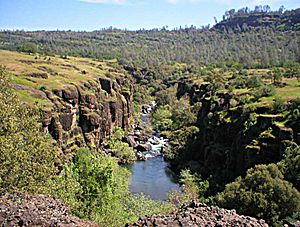 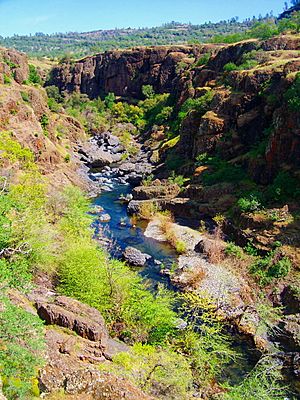 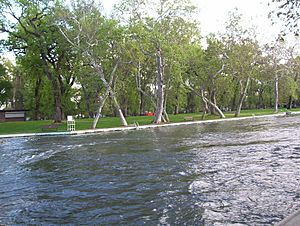 Bidwell Park is home to a multitude of plant and animal species due to it being at a point where Sierra Nevada, Cascade, and Central Valley species interact. The parks ecology also changes East-West as the park changes from flat valley to rugged foothills. The park's climate is classified as Mediterranean because it has cool rainy winters and hot dry summers.

Plant life in the area changes as the park rises out of the valley, from riparian to chaparral. In the riparian along Big Chico Creek the main species include, Western Sycamore, the endemic to California valley oak, wild grape, blackberry, and California black walnut. Oak woodlands are an especially important ecosystem in the park. Past the 5-Mile Recreation Area, the foothills of the southernmost Cascade Mountains begin and the flora changes. Gray pine or Foothill Pine emerge. In some parts ponderosa pine, incense cedar, and douglas-fir are present. California buckeye, manzanita, California bay laurel, miner's lettuce, interior live oak, and seasonal field grasses cover the canyon floor. On top the mesas on each side of the canyon, blue oak are present due to their deep taproots allowing survival in dry conditions.

The geography of Bidwell Park is relatively simple. Big Chico Creek enters the park from the east within Iron Canyon, a deep, thin channel characterized by large boulders of basalt, and tall, steep cliffs. Iron Canyon is situated in a larger canyon called Chico Canyon. Chico Canyon is a bowl-shaped canyon with flat mesas on each side. Downstream, the creek exits Iron Canyon and begins to widen at the floor of the relatively flat bottom of Chico Canyon. As the creek leaves the foothills it begins to meander on the floor of the Sacramento Valley. West of 5-Mile Recreation Area, the creek enters more urban parts of the park. Near where the creek passes under California State Highway 99 is Teichert Ponds, an accidental flooding during the construction of the freeway. It is now part of Bidwell Park. The park begins to thin as it stretches into the heart of Chico. By its westernmost point, the park encompasses just the banks of the creek. The western boundary is at the Esplanade road.

The bedrock layer under the park, and much of California is called the Chico Formation. It consists of sandstone and fossils from an ancient sea that once covered the Central Valley and the ancestral Sierra Nevada Mountains during the Cretaceous Period. This formation is visible in Upper Park near the eastern boundary. It is also visible in many areas outside the park in the Sierra Nevada, Coastal Ranges and Cascade foothills. Above the Chico Formation lies the Lovejoy Basalt. Evident by its dark, smooth complexion, the Lovejoy Basalt makes up most of Iron Canyon in Upper Bidwell Park. Swimming holes such as Bear Hole and Salmon lie in the basalt. This rock erupted from an ancient volcano near present-day Susanville, CA about 15 million years ago, during the Miocene. The Lovejoy Basalt extends through much of Northern California, and is notable at Table Mountain near Oroville, CA, and Black Butte Lake, west of Orland, CA. Above the Lovejoy Basalt lies the Tuscan Formation, a complex of volcanic lahars and ash, separated by layers of river cobble. The Tuscan Formation was created in a series of volcanic mudflows from extinct volcanoes, Mt. Maidu and Mt. Yana, between 10 and 2 million years ago during the Pleistocene. The formation dives beneath Chico and holds the city's immense aquifer from which it derives its water. The Tuscan Formation is visible in all of Upper Park, and forms the steep canyon walls of Chico Canyon, and makes up the famous Monkey Face rock formation. Lower Bidwell Park sits atop a deep soil complex of alluvium deposited by Big Chico Creek. This allows for the thick canopy of trees and undergrowth seen in lower park.

Chico Creek Nature Center, the park's official interpretive center, is managed by the Chico Area Recreational District (CARD), however, it was a private non-profit until 2018. It is dedicated to enhancing the public's awareness of Bidwell Park and its wildlife. The center features non-releasable injured wildlife and donated animals in the Janeece Webb Living Animal Museum and the Alice Heckert Native Plant Garden. The Center opened a new facility in spring of 2010, including the installation of new natural history exhibits in Howard S. Tucker Hall and a hands-on science classroom, Kristie's Nature Lab.

All content from Kiddle encyclopedia articles (including the article images and facts) can be freely used under Attribution-ShareAlike license, unless stated otherwise. Cite this article:
Bidwell Park Facts for Kids. Kiddle Encyclopedia.