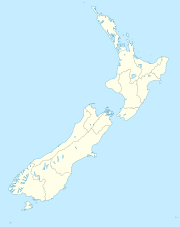 Big Bay, also known as Awarua Bay, is a deep indentation in the southwestern coast of New Zealand's South Island, 40 kilometres north of Milford Sound and immediately to the north of Martins Bay. The bay is eight kilometres in width, and extends eight kilometres into the South Island, making an almost square indentation in the island's coastline. Its northern end is Awarua Point. Immediately beyond Long Reef, the rocky point at the southern end, is the mouth of the Hollyford River and Martins Bay. Big Bay has a sandy beach named Three Mile Beach. The Awarua River enters the bay at the northern end of the beach.

All content from Kiddle encyclopedia articles (including the article images and facts) can be freely used under Attribution-ShareAlike license, unless stated otherwise. Cite this article:
Big Bay (New Zealand) Facts for Kids. Kiddle Encyclopedia.