Big Bushkill Creek (Bush Kill on federal maps) is a 30.1-mile-long (48.4 km) tributary of the Delaware River in the Poconos of eastern Pennsylvania in the United States.

Bush Kill joins the Delaware River at the village of Bushkill. 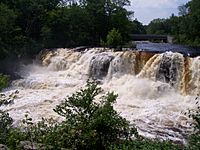 (There are at least five unnamed tributaries to the Bush Kill)

All content from Kiddle encyclopedia articles (including the article images and facts) can be freely used under Attribution-ShareAlike license, unless stated otherwise. Cite this article:
Big Bushkill Creek Facts for Kids. Kiddle Encyclopedia.