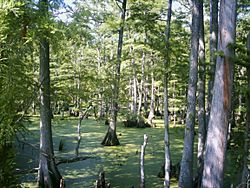 Cypress Bayou is the name applied to a series of wetlands at the western edge of Caddo Lake, in and around Jefferson, Texas, making up part of the largest Cypress forest in the world. The bayou is divided into three areas—each part of the watershed of a small river or creek—Little Cypress, Big Cypress, and Black Cypress. The features had been modified, to an extent, by human beings in the 19th and 20th centuries, but today is endangered by pollution, development, and the deforestation, through clear cutting, of the Piney Woods that surround the bayous. Large groves of trees have completely died off, and land has been recently deforested up to the water's edge.

All content from Kiddle encyclopedia articles (including the article images and facts) can be freely used under Attribution-ShareAlike license, unless stated otherwise. Cite this article:
Big Cypress Bayou (wetland) Facts for Kids. Kiddle Encyclopedia.