Little Pisgah Mountain contains several creeks and tributaries that flow into Garren Creek. Big Rock Falls is fed by a tributary on the northwest side of the mountain. 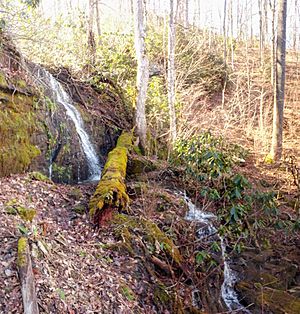 Photo of Big Rock Falls and its punchbowl on Little Pisgah Mountain in Fairview, North Carolina.

The mountain and the falls are located on private property whose owners do not permit public access.

Other falls in the region include:

All content from Kiddle encyclopedia articles (including the article images and facts) can be freely used under Attribution-ShareAlike license, unless stated otherwise. Cite this article:
Big Rock Falls (North Carolina) Facts for Kids. Kiddle Encyclopedia.