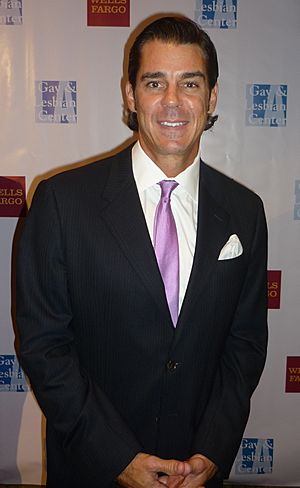 William Daro "Billy" Bean (born May 11, 1964 in Santa Ana, California) is a former Major League Baseball player. He attended Loyola Marymount University in Los Angeles. He was an outfielder, a pinch hitter, and a first baseman. He threw and batted left. Bean is gay, and wrote a book, Going the Other Way: Lessons from a Life in and out of Major League Baseball. For 13 years, Bean was the partner of Efrain Viega, the founder of Yuca restaurant in Miami. They broke up in July 2008. Bean has appeared on television. He starred in a MTV episode of Made, and he was an actor in an episode of the sitcom Frasier.

All content from Kiddle encyclopedia articles (including the article images and facts) can be freely used under Attribution-ShareAlike license, unless stated otherwise. Cite this article:
Billy Bean Facts for Kids. Kiddle Encyclopedia.