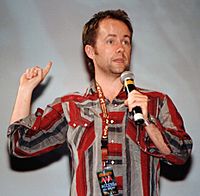 Billy Boyd (born August 28, 1968, in Glasgow) is a Scottish actor. He is best known for playing Peregrin Took in the Lord of the Rings movie trilogy (2001-2003) and Barrett Bonden in Peter Weir's movie Master and Commander: The Far Side of the World (2003).

He lives in a house in Lesmahagow with his girlfriend, Alison McKinnon. On April 26, 2006, he and McKinnon had their first child: Jack William Boyd.

All content from Kiddle encyclopedia articles (including the article images and facts) can be freely used under Attribution-ShareAlike license, unless stated otherwise. Cite this article:
Billy Boyd Facts for Kids. Kiddle Encyclopedia.