The club was founded in 1894 as a merger of Bilston Rovers and Bilston Wanderers, and was initially known as Bilston United. In the same year they joined the Walsall & District Junior League. After finishing fourth in their first season, they won the league in 1895–96. The league was renamed the Walsall & District League in 1897 and the club were runners-up in 1898–99. They won the league again in 1900–01 and retained the title the following season, before finishing as runners-up in 1902–03. After finishing third in 1906–07, the club moved up to the Birmingham Combination, where they finished as runners-up in their first season.

Bilston remained in the Combination until the end of the 1920–21 season, when they joined the Birmingham & District League. They were runners-up to Shrewsbury Town in 1922–23 and spent the rest of the 1920s in mid-table before finishing second-from-bottom in 1929–30. They left the league at the end of the 1931–32 season, dropping into the Walsall & District League and changing their name to Bilston Borough.

Their first season back in the Walsall & District League saw Bilston win the league title, a feat they repeated in 1935–36, before finishing the 1937–38 season as runners-up. After disbanding in 1939 due to World War II, the club was reformed in 1946 under the name Bilston. Rejoining the renamed Walsall Senior, they were champions in 1947–48, after which they rejoined the Birmingham Combination in 1948, finishing second-from-bottom of the league in 1950–51. They were runners-up in 1953–54, the last season before the league merged into the Birmingham & District League, with Bilston placed in the Northern Division. An eighth-place finish in 1954–55 saw the club placed in Division One the following season. However, after finishing in the bottom four, they were relegated to Division Two.

Bilston were Premier Division runners-up the following season and again in 1975–76. Despite finishing bottom of the division in 1979–80 they avoided relegation to Division One. The club was renamed Bilston Town in 1983. They were Premier Division runners-up in 1984–85, earning promotion to the Midland Division of the Southern League. The division was renamed the Western Division in 1999, with the club missing out on promotion to the Premier Division by two points in 2000–01. They finished seventeenth the following season, after which the club resigned from the league, dropping into Division One North of the West Midlands Regional League. 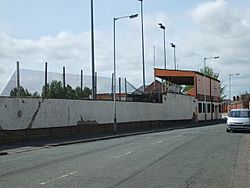 The exterior of the Queen Street ground 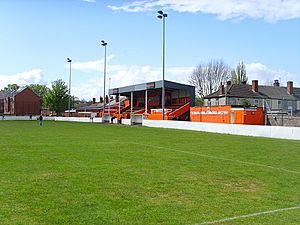 Early in the club's history they played at Prouds Lane, using the nearby Spread Eagle pub as their changing room. They moved to Queen Street after in 1919, with the opening game played against Tamworth Castle in the FA Cup, with Bilston winning 1–0. Floodlights were installed in 1953 and were first used for a match against Wolverhampton Wanderers on 10 March 1953, with a record attendance of 8,000 seeing Wolves win 4–2. The ground's record attendance for a competitive game was set in 1968–69 for the FA Cup first round match against Halifax Town, when 4,300 spectators attended the game.

After over 120 attacks by vandals in five years, the ground was closed in 2007 after it was deemed to be unsafe, with the club having to play on an unenclosed pitch at Bantock park. In 2008 plans were announced to refurbish and reopen the ground, Work was complete ready for the 2008–09 season, with the club signing a 99-year lease. 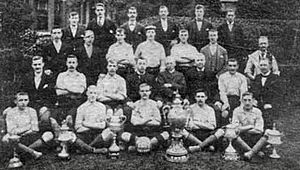 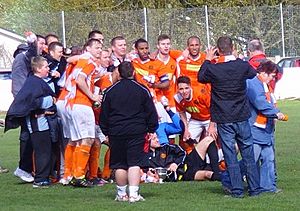 All content from Kiddle encyclopedia articles (including the article images and facts) can be freely used under Attribution-ShareAlike license, unless stated otherwise. Cite this article:
Bilston Town F.C. Facts for Kids. Kiddle Encyclopedia.