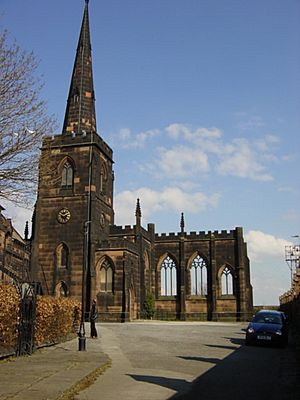 St Mary's Tower on the grounds of Birkenhead Priory. 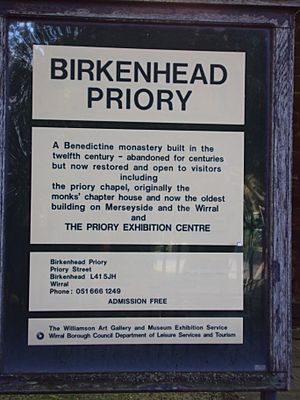 Birkenhead Priory is in Priory Street, Birkenhead, Merseyside, England. It is the oldest standing building on Merseyside. The remains of the priory are recorded in the National Heritage List for England as a designated Grade I listed building, and it is a Scheduled Ancient Monument.

The Priory was founded about 1150 by Hamon de Masci, 3rd Baron of Dunham Massey for the Benedictine Order. It was visited twice by Edward I due to its strategic importance, being close to the Irish Sea as well as the Welsh border.

In 1318 the monks from Birkenhead Priory were granted ferry rights by Edward II. This allowed them to build a house in what is now Water Street to store their corn. The house was also used by travellers for shelter if the weather was too bad for the ferry to cross the River Mersey.

The priory's chapter house remains a consecrated Anglican church and is still in use for services; it is a Grade II* listed building containing elements of Norman architecture and was restored in 2005. The upper floor of the chapter house, the Scriptorium, contains a chapel dedicated to the training ship HMS Conway.

St Mary's Tower was originally part of Birkenhead's first parish church, opened in 1821 in the grounds of the priory. It is a Grade II listed building.

The ground floor of the Frater House contains a museum detailing the history of the site.

Redevelopment of the area from 1925 resulted in a large amount of residential housing within the parish being cleared to make way for the construction of the Queensway Tunnel. An expansion of the Number 5 dry dock at the adjacent Cammell Laird shipyard in the 1960s resulted in the church losing a significant portion of its graveyard. Subsequent redevelopment of the approach roads to the Mersey Tunnel effectively cut off the church from most of what remained of its parish, further dwindling the congregation. St. Mary's Church closed in 1974 and was partly demolished a year later, for reasons of safety. Only the former church tower and parts of the outer walls remain. The tower has since been refurbished and is dedicated to those who died in HMS Thetis.

The churchyard contains the burial vault of the Laird family, which includes John Laird (1805–74), Birkenhead's first Member of Parliament and co-founder of the adjacent Cammell Laird shipbuilding company.

All content from Kiddle encyclopedia articles (including the article images and facts) can be freely used under Attribution-ShareAlike license, unless stated otherwise. Cite this article:
Birkenhead Priory Facts for Kids. Kiddle Encyclopedia.