The Birmingham Assay Office, one of the four assay offices in the United Kingdom, is located in the Jewellery Quarter, Birmingham. The development of a silver industry in 18th century Birmingham was hampered by the legal requirement that items of solid silver be assayed, and the nearest Assay Offices were in Chester and London. Matthew Boulton and Birmingham's other great industrialists joined forces with silversmiths of Sheffield to petition Parliament for the establishment of Assay Offices in their respective cities. In spite of determined opposition by London silversmiths, an Act of Parliament was passed in March 1773, just one month after the original petition was presented to Parliament, to allow Birmingham and Sheffield the right to assay silver. The Birmingham Assay Office opened on 31 August 1773 and initially operated from three rooms in the King's Head Inn on New Street employing only four staff and was only operating on a Tuesday. The first customer on that day was Matthew Boulton.

The assay office is managed by a board of 36 "Guardians of the Standard of Wrought Plate in Birmingham", between six and nine of whom must be connected with the trade.

The assay office marks for London, Birmingham, Sheffield, and Edinburgh. The second from the left shows the anchor for Birmingham. The anchor mark no longer indicates that an item was assayed in Birmingham. In July 2016 Birmingham Assay Office began striking its hallmark in Mumbai, India and plans a second offshore assay centre in Jaipur. 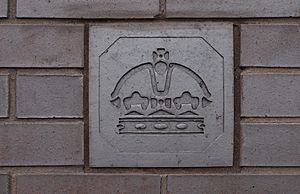 One of the "hallmark" bricks

Due to lack of capacity in its Newhall Street building it was decided that a new Assay Office would be needed. A site on the western edge of the Jewellery Quarter was chosen and planning permission was secured in December 2012 and construction started in May 2014 for a scheduled completion in 2015. The construction was project managed by Trebor Developments with Galliford Try as principal contractor, O’Brien as sub-contractors and Glazzard Architects as architects.

The design of the new building incorporates special “feature bricks” which bear the key hallmarking symbols used during the Assay Office’s 240-year history. These include the traditional hallmarking symbols; a lion for Sterling Silver, crown for Gold, orb for Platinum and Pallas Athene for Palladium. The famous Birmingham town mark, the anchor, also features prominently.

There are also a dozen which feature the sponsors' marks of some of its most significant customers. In recognition of the honour, these customers contributed £12,000 to charity. The full list of companies featured is: Thomas Fattorini, R Platnauer, Toye, Kenning & Spencer, Cooksongold, Deakin & Francis, BJA (British Jewellers’ Association, now National Association of Jewellers), F. Hinds, Charles Green, Hockley Mint, Weston Beamor, Jewellery Brokers and Martyn Pugh.

The building includes a private museum. The former building on Newhall Street was converted into the 'Assay Studios' a creative office space and innovation hub in November 2016.

All content from Kiddle encyclopedia articles (including the article images and facts) can be freely used under Attribution-ShareAlike license, unless stated otherwise. Cite this article:
Birmingham Assay Office Facts for Kids. Kiddle Encyclopedia.