Bishop Island was an island near the mouth of the Brisbane River in Moreton Bay, Queensland, Australia. 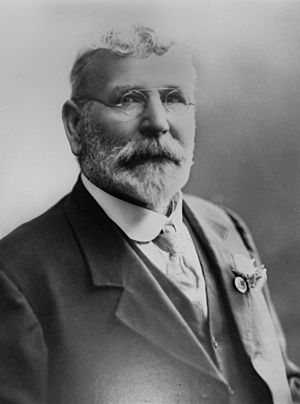 Bishop Island was formed by dredging at the mouth of the Brisbane River between 1909 and 1912. It was named Bishop Island in 1912 after Allan Fitzroy Gordon Bishop, the captain of the dredge Hercules involved in creating the island.

Many ships were dumped on the island. The Australian United Steam Navigation Company's SS Bingera was dumped in 1926; it was built to provide the mail service between Brisbane, Gladstone and Townsville and became redundant when the railway line to Townsville was completed. The Queensland Government's steam yacht Lucinda was dumped on 28 January 1937.

In 1976, the island was used by the Port of Brisbane. In 2004, the port expanded through land reclamation in Moreton Bay, resulting in Bishop Island ceasing to exist as an island, becoming part of the mainland port.

All content from Kiddle encyclopedia articles (including the article images and facts) can be freely used under Attribution-ShareAlike license, unless stated otherwise. Cite this article:
Bishop Island (Queensland) Facts for Kids. Kiddle Encyclopedia.