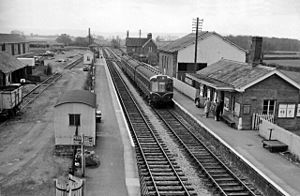 View towards Norton Fitzwarren in 1963

The station was first opened on 31 March 1862 when the West Somerset Railway was opened from Norton Junction to Watchet, operated by the Bristol and Exeter Railway (B&ER). On opening the station had just one platform on the line's west side, with goods facilities consisting of a siding to a goods shed on the west, and a passing loop plus two sidings on the northeast was served by a passing loop and two sidings. There was also a house for the station master.

The second eastern platform was not added until 1906, together with a connecting foot bridge. The standard-pattern GWR medium-scale signal box was also added at the end of the platform, operated via a 25 lever stud-locking frame. On 10 June 1936 the line was doubled from here to Norton Fitzwarren, resulting in the signal box being upgraded to a 32 lever frame.

Nationalisation in 1948 saw it become a part of the Western Region of British Railways. On 1 March 1970 the signal box was closed and its frame removed, and the track from Norton Fitzwarren through Bishop’s Lydeard and as far as Williton was operated as a single track. The station was closed by BR, along with the entire line, on 4 January 1971.

After the entire line and its trackbed were bought by Somerset County Council, the West Somerset Railway agreed to lease the line as a heritage railway, with the later possibility of operating timetabled service trains into Taunton via operating company, the WSR plc. Track remains to Norton Fitzwarren, controlled through a single token and colour light signals, to allow special trains and occasional goods trains to operate through from Network Rail to the WSR.

The WSR revived the line from its western end, starting at Minehead and operating to Stogumber, before extending operations through to Bishops Lyeard on 9 June 1979. Initially the section west of Williton was operated as one-train-only, before the WSR began operating Bishops Lydeard as a terminus. After the society secured a new 33 lever frame in 1981, following extensive fund raising the stations loop was extended to its current length of 275 yards (251 m), to allow for dual-platform arrival/departures. HM Railway Inspectorate approved the new plans in 1997, and the full system including control of the Norton Fitzwarren section came into use from August 1998.

In 2019, the WSR entered into a partnership with the modern Great Western Railway (GWR) to operate Summer Saturday services to Bishops Lydeard from Taunton beginning on 27 July 2019. The introduction of these GWR services will mark the first time the station has been connected to the rest of the national rail network since its initial closure in 1971. 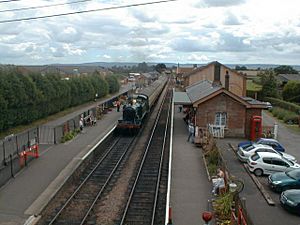 View from the bridge at the north end

Today the station has two operational platforms. It is the headquarters of the West Somerset Railway Association which provides volunteer support for the railway and the Associations's Quantock Belle dining car train is based here.

The original south western No.1 platform, was extended yet further towards Taunton by the WSR to allow for dual-platform departure. The old goods shed has been restored and is used as a visitor centre and museum; its artefacts includes a GWR sleeping car, and the Taunton Model Railway Club’s model railway layout. The original station offices with modern toilets are now used by the West Somerset Railway Association.

The northern 1906-built platform, No.2, is today the stations main operating platform. Accessed via a carpark to its rear, it contains the ticket office, toilets and a shop, and the now enclosed signal box, with a similar platform extension towards Taunton. This extension provided for the inclusion of the Taunton-facing platform No.3 but this is only operated as a siding as it has no direct connection to the running lines. It is normally used to house the "Quantock Belle" dining cars.

The northern locomotive stabling yard is also based here (northeast of No.2, not accessible to the public), which is where visiting locomotives arriving by road are unloaded onto the WSR. 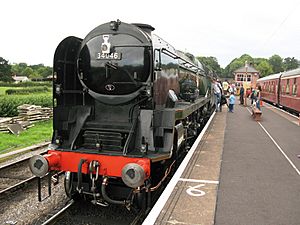 Braunton arrives with a train from Minehead

Trains run between Minehead and Bishops Lydeard at weekends and on some other days from March to October, daily during the late spring and summer, and on certain days during the winter. During special events a shuttle service runs between Bishops Lydeard and Norton Fitzwarren and from time to time special trains also run through onto Network Rail's tracks at Taunton. From 27 July 2019, Great Western Railway started operating a service from Taunton on occasional summer Saturdays.

For those outside the area, Bishops Lydeard is the WSR's main access point:

All content from Kiddle encyclopedia articles (including the article images and facts) can be freely used under Attribution-ShareAlike license, unless stated otherwise. Cite this article:
Bishops Lydeard railway station Facts for Kids. Kiddle Encyclopedia.