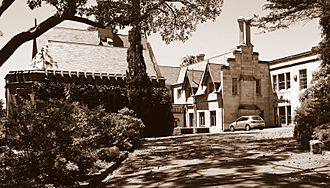 Bishopscourt is a historic house in the Sydney suburb of Darling Point. It is heritage-listed.

Originally known as Greenoaks, Bishopscourt was designed by Edmund Blacket. A cottage originally occupied the site, and the owner, Thomas Sutcliffe Mort, built the sandstone Gothic Revival mansion around this building, circa 1850-1860. Further extensions were made in 1935 after being designed by Leslie Wilkinson. The exterior features Tudor windows and carved doors and crests. The interior was based on the Palace of Westminster and is considered to be an outstanding example of Blacket's work, with stained-glass windows, tiled floors, an elaborate staircase and panelled library. The house was later acquired by the Anglican Church of Australia and became the official residence of the Anglican Archbishop of Sydney.

The Church sold the property in December 2015 for A$18 million.

All content from Kiddle encyclopedia articles (including the article images and facts) can be freely used under Attribution-ShareAlike license, unless stated otherwise. Cite this article:
Bishopscourt, Darling Point Facts for Kids. Kiddle Encyclopedia.