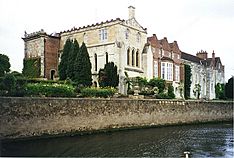 Bishopthorpe Palace viewed from the Ouse, 1995

Bishopthorpe Palace is a country house and historic house at Bishopthorpe, to the south of York, in the City of York unitary authority and ceremonial county of North Yorkshire, England. It is situated on the River Ouse and is the official residence of the Archbishop of York; within the local area it is sometimes simply called "the Archbishop's Palace".

In 1226, Archbishop Grey bought the manor house at what was then St. Andrewthorpe and gave it to the Dean and Chapter of York Minster. Since then, the village became known as Bishopthorpe. In 1241 he built a Manor House and Chapel on the site. A red brick north wing was built in the fifteenth century and the Gatehouse was built in 1765. In 1863, a water tower was built to extract water from a well, rather than using river water for drinking. The tower was demolished in 1946 but some foundations are still visible in garden of Iona Lodge.

The palace is a Grade I listed building in a wooded, rural setting and includes a gatehouse, stables, a brewhouse and brewster's cottage. It was remodelled by Thomas Atkinson between 1763 and 1769.

Archbishop John Sentamu did not initially move into the palace, as it was just beginning a major renovation and restoration at the time.

All content from Kiddle encyclopedia articles (including the article images and facts) can be freely used under Attribution-ShareAlike license, unless stated otherwise. Cite this article:
Bishopthorpe Palace Facts for Kids. Kiddle Encyclopedia.