Bistorta vivipara (synonym Persicaria vivipara) is a perennial herbaceous flowering plant in the knotweed and buckwheat family Polygonaceae, commonly known as alpine bistort. Scientific synonyms include Bistorta vivipara and Polygonum viviparum. It is common all over the high Arctic through Europe, North America, and temperate and tropical Asia. Its range stretches further south in high mountainous areas such as the Alps, Carpathians, Pyrenees, Caucasus, and the Tibetan Plateau. 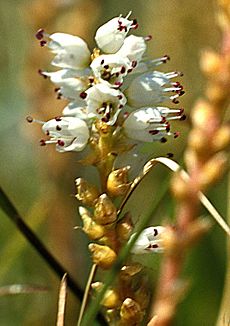 Alpine bistort is a perennial herb that grows to 5 to 15 cm (2 to 6 in) tall. It has a thick rhizomatous rootstock and an erect, unbranched, hairless stem. The leaves are hairless on the upper surfaces, but hairy and greyish-green below. The basal ones are longish-elliptical with long stalks and rounded bases; the upper ones are few and are linear and stalkless. The tiny flowers are white or pink in the upper part of the spike with five perianth segments, eight stamens with purple anthers and three fused carpels. The lower ones are replaced by bulbils. Flowers rarely produce viable seeds and reproduction is normally by the bulbils, which are small bulb-like structures that develop in the axils of the leaves and may develop into new plants. Very often, a small leaf develops when the bulbil is still attached to the mother plant. The bulbils are rich in starch and are a preferred food for rock ptarmigans (Lagopus mutus) and reindeer; they are also occasionally used by Arctic people. Alpine bistort flowers in June and July.

As with many other alpine plants, Alpine bistort is slow-growing and produces embryonic buds one year that grow and open a few years after their formation, with an individual leaf or inflorescence taking three to four years to reach maturity from the time the buds are formed.

Alpine bistort has been shown to form an ectomycorrhizal root symbiosis with fungi.

The bulbils can be stripped from the lower flower stalks and eaten raw. The young roots are edible raw, while older ones must be cooked. The young leaves can be eaten raw or cooked.

The roots are eaten in Russia, especially by the Samoyed peoples.

All content from Kiddle encyclopedia articles (including the article images and facts) can be freely used under Attribution-ShareAlike license, unless stated otherwise. Cite this article:
Bistorta vivipara Facts for Kids. Kiddle Encyclopedia.