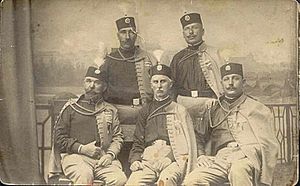 Early members of the Black Hand.

Black Hand or Crna Ruka, officially Ujedinjenje ili Smrt ("Unification or Death") was a secret group of Serbian nationalists (Pan-Serbians). It was founded in 1911 in Serbia.

Their aim was to create a country from other countries where Serbs lived, including Bosnia-Herzegovina which was a part of Austria-Hungary since 1908.

Five members of The Black Hand were in Sarajevo, Serbia, on 28 June, 1914 where Archduke Franz Ferdinand, the heir to the throne in Austria-Hungary, visited with his wife. Ferdinand was driven through the city in a convertible car. The members of the Black Hand attempted to kill Ferdinand by throwing grenades at his car. One of the grenades bounced off his car and exploded under the car following Ferdinand's. One of the members swallowed Cyanide and attempted to jump into the river, however the Cyanide was old, and the river was shallow, so he was arrested. One of the men, a Bosnian student called Gavrilo Princip, went to a cafe after failing to kill Ferdinand.

The Archduke and his wife decided to go and visit the people who were injured in the explosion in hospital, however the driver took a wrong turn and stopped outside the cafe where Princip was eating. Princip saw this and went outside. He took out a gun and shot at Ferdinand; two bullets hit the archduke, one hit his wife, and the other hit the car. Both Ferdinand and his wife died shortly after.

Austria-Hungary blamed Serbia for the assassination. Austria-Hungary then declared war on Serbia, and Russia joined the war on Serbia's side because the people of Serbia were Slavic, like Russia, and the Slavic countries had agreed to help each other if they were attacked. Since Russia is a large country it had to move soldiers closer to the war, but Germany feared that Russia's soldiers would also attack Germany. Russia did not like Germany because of things Germany had done in the past to become stronger. Germany declared war on Russia, and used a plan to attack Russia that had been created before the war, but it also involved attacking France and Belgium. France and Great Britain joined the war because Great Britain had agreed to help Belgium if it were ever attacked by someone else.

This quickly led to a full-scale war. Austria-Hungary declared war on Serbia. Both country's allies became involved in the war, and soon most of Europe became involved.

All content from Kiddle encyclopedia articles (including the article images and facts) can be freely used under Attribution-ShareAlike license, unless stated otherwise. Cite this article:
Black Hand Facts for Kids. Kiddle Encyclopedia.