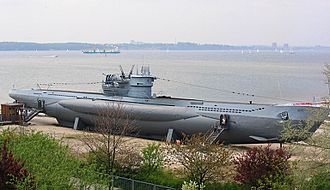 U-995 Type VIIC at the German navy memorial at Laboe

After February battles around convoys SC 118, ON 166, and UC 1, Black May was the culmination of the March– May 1943 crisis in the Battle of the Atlantic.

March had seen the U-boat offensive reach its peak, with a series of major convoy battles, first around convoys HX 228, SC 121, and UGS 6; then followed the battle for HX 229/SC 122, the largest convoy battle of the war.

A Royal Navy report later concluded "The Germans never came so near to disrupting communications between the New World and the Old as in the first twenty days of March 1943".

April saw some respite, as UBW was unable to maintain such a large presence in the Atlantic in April. Many of the boats heavily involved in March had withdrawn for replenishing; nevertheless the boats still operational in the month remained active. A particular shock at the end of April was the attack by U-515 on convoy TS 37, which saw the loss of four tankers in three minutes, and another three over the next six hours.

However, the following month saw the strategic and tactical advantage swing to the allies, where it remained for the rest of the campaign.

May opened with the battle for ONS 5, a hard-fought clash which saw heavy losses on both sides; 13 ships were lost for the loss of six U-boats. But the tactical improvements of the escorts began to take effect; The next three convoys that attacked saw seven ships sink, for the loss of seven U-boats. Finally, convoy SC 130 saw five U-boats sink (Admiral Dönitz's son Peter was among those lost aboard U-954) without loss to the convoy.

Shaken by this, Admiral Dönitz ordered a retreat from the Atlantic, in order to recoup; the U-boats were unable to return to the fray in significant numbers until autumn, and never regained the advantage.

May 1943 saw the U-boat strength reach its peak, with 240 operational U-boats of which 118 were at sea, yet the sinking of Allied ships continued to decline. May 1943 also saw the greatest losses suffered by U-boats up to that time, with 41 being destroyed in May 1943 — 25% of the operational U-boats.

On 24 May 1943, Karl Dönitz — shocked at the defeat suffered by the U-boats — ordered a temporary halt to the U-boat campaign; most were withdrawn from operational service.

May had seen a drop in allied losses coupled with a disastrous rise in U-boat losses; 18 boats were lost in convoy battles in the Atlantic in the month, 14 were lost to air patrols; six of these in the Bay of Biscay. With losses in other theatres, accident, or other causes, the total loss to the U-boat arm in May was 43 boats.

This was the worst month for losses suffered by UBW in the war so far, nearly 3 times the loss in the previous worst month, and more boats than had been lost in the whole of 1941. Equally significant was the loss of experienced crews, particularly the junior officers who represented the next generation of commanders.

Black May signalled a decline from which UBW never recovered; Despite various efforts over the next two years, the U-boats were never able to re-establish the threat to allied shipping they had posed.

All content from Kiddle encyclopedia articles (including the article images and facts) can be freely used under Attribution-ShareAlike license, unless stated otherwise. Cite this article:
Black May (1943) Facts for Kids. Kiddle Encyclopedia.