Kids Encyclopedia Facts
This page is about the literary device. For the 1887 painting called The Black Spot, see Albert Bettannier. For other uses, see Black Spot. 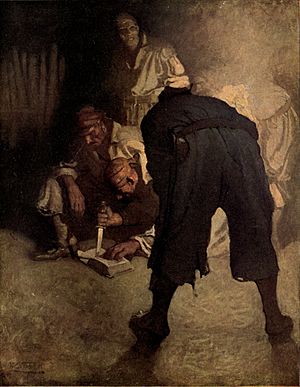 The Black Spot is a literary device invented by Robert Louis Stevenson for his novel Treasure Island (serialized 1881–82, published as a book in 1883). In the book, pirates are presented with a "black spot" to officially pronounce a verdict of guilt or judgement. It consists of a circular piece of paper or card, with one side blackened while the other side bears a message and placed in the hand of the accused. It was a source of much fear because it meant the pirate was to be deposed as leader, by force if necessary—or else killed outright. In Treasure Island, Billy Bones is much frightened by it but remains determined to outwit his enemies; however, he suffers a stroke caused by the overconsumption of liquor and is killed by the blind beggar (Pew). Later Long John Silver receives the spot, but is calm enough to notice that the paper bearing the spot has been torn out from a Bible, and warns his associates of the bad luck this will bring upon them.

The words on the back of that black spot were spookily from Revelation, like an allusion to the beast's mark and judgement day i.e. Chapter 29:

It was around about the size of a crown piece. One side was blank, for it had been the last leaf; the other contained a verse or two of Revelation—these words among the rest, which struck sharply home upon my mind: "Without are dogs and murderers." The printed side had been blackened with wood ash, which already began to come off and soil my fingers; on the blank side had been written with the same material the one word "Depposed".

The origin of Stevenson's Black Spot might be in the historical tradition of Caribbean pirates of showing an Ace of Spades to a person condemned as traitor or informer. The card was putting the person dangerously "on the spot", as the ace bears a single pip.

Appearances in other works

The Black Spot has since been used in other works of popular culture:

All content from Kiddle encyclopedia articles (including the article images and facts) can be freely used under Attribution-ShareAlike license, unless stated otherwise. Cite this article:
Black Spot (Treasure Island) Facts for Kids. Kiddle Encyclopedia.