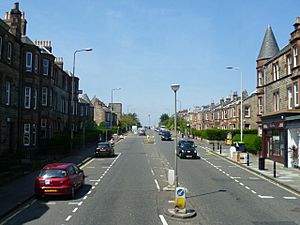 Blackhall is a suburb in the north west of the Scottish capital city Edinburgh.

According to Stuart Harris in The Place Names Of Edinburgh the "Black-" in the placename could derive either from the Anglian blaec or Scots blac meaning simply black, and the "-hall" ending is from the Anglian halh or Scots haugh meaning land beside or in the bend of a river.

There is also evidence that the street name "March Road" is derived from "Marsh Road", as the area was bog and wetland hundreds of years ago. Nowadays Blackhall is a mainly residential area with amenities including a library and a small number of shops. Most of the housing in the neighbourhood was constructed in the inter-war period, although the recent housing boom has seen new development on the northern slope of Corstorphine Hill. This development went ahead despite considerable opposition from the local community and an unusual planning quirk which allowed the development to go ahead based on forty-year-old outline permission.

Blackhall has numerous community and church-based groups including a bowling club, two Probus groups, and a horticultural society. There is a local community council, Craigleith/Blackhall, that serves the area.

The local school, Blackhall Primary School, has recently been extended and parts rebuilt, as has the local Royal High School which serves Blackhall.

One of the main arterial routes of the city goes through the area, which borders Drylaw, Davidson's Mains, and Craigcrook.

All content from Kiddle encyclopedia articles (including the article images and facts) can be freely used under Attribution-ShareAlike license, unless stated otherwise. Cite this article:
Blackhall, Edinburgh Facts for Kids. Kiddle Encyclopedia.