Corstorphine Hill is a low ridge-shaped hill rising above the western suburbs of Edinburgh, Scotland. Although there has been residential and commercial development on its lower slopes, especially in the south and west, most of the hill is occupied by a local nature reserve, consisting of extensive broadleaf woodland, and is accessible to the public. The hill, which is composed largely of dolerite, was formed by the west-to-east movement of glaciers during the Pleistocene period. There is evidence of prehistoric settlement. Today the hill is popular with walkers, dog-walkers and joggers. Among its interesting features are a 19th-Century tower, a walled garden and a Cold War bunker.

Corstorphine Hill is located approximately 5 kilometres (3.1 miles) west of Edinburgh's city centre. It is surrounded by residential suburbs, in particular by Barnton and Davidson's Mains to the north, Blackhall and Murrayfield to the east, Corstorphine to the south, and Clermiston to the west.

The hill is a prominent feature of Edinburgh’s skyline. It appears as a long, low, L-shaped ridge, extending about 2.4 kilometres (1.5 miles) in length from north to south and rising to 161 metres (528 feet). The upper slopes, which are heavily wooded, form a local nature reserve (LNR), managed by the City of Edinburgh Forestry and Natural Heritage Service and the Friends of Corstorphine Hill. It is the largest urban woodland in the city.

By contrast, parts of the lower slopes have been built on, particularly in the south and west. The area between Kaimes Road and Clermiston Road is largely residential, consisting mainly of bungalows and small villas. Other buildings on the hill include Fox Covert Primary School, two large hotels (Capital Moat House and Holiday Inn), St Andrew's Clermiston Church, St Anne's Parish Church and the Spire Murrayfield Hospital. Some 82 acres (33 ha) of the southern slopes are occupied by Edinburgh Zoo.

Corstorphine Hill is one of Edinburgh's traditional "Seven Hills", an allusion to the Seven Hills of Rome. It is the fourth highest of the seven.

The LNR consists of three broad types of woodland. There are about 15 acres (6.1 ha) of oak and birch woods into which sycamore and beech have been introduced. Some 21 acres (8.5 ha) of mixed broadleaf woodland are present, composed primarily of native ash, oak and elm into which sycamore, lime, Norway maple, horse chestnut, sweet chestnut, beech and various conifers have been introduced. And there are about 11 acres (4.5 ha) of more formal policy woodland originally associated with Hillwood House and Calderwood House, and composed of a variety of native and non-native broadleaf and coniferous species.

There is evidence of prehistoric settlement on Corstorphine Hill. At the end of the 19th century, quarrying operations uncovered shells, bones, stone tools and pottery, while hammer stones, cup-marked stones, part of a quern and other pottery fragments from a kitchen midden have also been discovered. There are eleven cup-marks on the western slopes, nine in the shape of a pentagon with two in the centre. These were probably part of a sacred Neolithic or Bronze Age site, but their precise purpose is unknown.

Corstorphine Hill is made up primarily of dolerite, a hard, crystalline igneous rock, sitting above softer, more erodible sedimentary rocks. The hill was shaped by west-to-east flowing glaciers during the Pleistocene period, forming steep cliffs of doleritic bedrock in the west and gentle slopes of boulder clay in the east. The top surface of the dolerite shows grooves cut by stones scraping the surface, these being set in the base of the ice and acting like sandpaper. 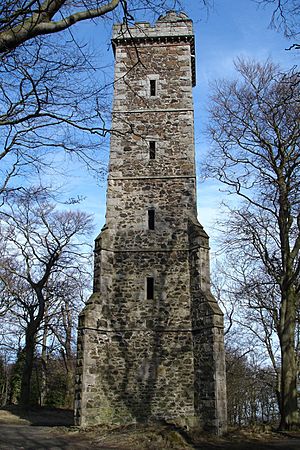 The LNR is a popular location for informal recreation such as walking, dog-walking, jogging, bird-watching and sledging. The extensive tree cover limits the view from most of the hill, but the summit offers extensive views in all directions. Since 2010, the hill has been a recipient of a Green Flag Award in recognition of its quality as an open space.

The hill hosts a permanent orienteering course, established by the Edinburgh Southern Orienteering Club. The 215 kilometres (133.6 miles) John Muir Way long-distance path crosses the hill on the section of its route between South Queensferry and Edinburgh. The hill is also on the route of the Seven Hills of Edinburgh race, an annual running race which takes in the summits of the city's traditional "seven hills". The race, which was established in 1980, is usually held on a Sunday in June.

All content from Kiddle encyclopedia articles (including the article images and facts) can be freely used under Attribution-ShareAlike license, unless stated otherwise. Cite this article:
Corstorphine Hill Facts for Kids. Kiddle Encyclopedia.