Kids Encyclopedia Facts
Not to be confused with Barnton, Cheshire.

Barnton is an affluent district of Edinburgh, Scotland, located to the north-west of the city. Part of the area was traditionally known as "Cramond Muir" in reference to the suburb to the north.

It is home to the Royal High School of Edinburgh; Braehead House, a plain Scots Classical house dating from c. 1700; and The Royal Burgess Golfing Society, one of the oldest golf societies in the world. Barnton Quarry, a former stone quarry in the area, is the (now derelict) site of an underground bunker which, in the event of nuclear war, would have served as the regional seat of government for Scotland from 1961 until its abandonment in 1985. 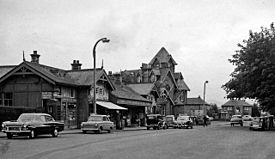 All content from Kiddle encyclopedia articles (including the article images and facts) can be freely used under Attribution-ShareAlike license, unless stated otherwise. Cite this article:
Barnton, Edinburgh Facts for Kids. Kiddle Encyclopedia.