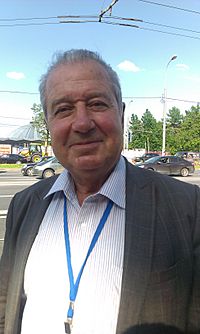 Blagovest Hristov Sendov (Bulgarian: Благовест Христов Сендов; 8 February 1932 – 19 January 2020) was a Bulgarian diplomat, mathematician and politician. He served as the chairperson of the National Assembly from 1995 to 1997. He was also the National Assembly's deputy chairperson from 1997 to 2002. He was the Bulgarian ambassador to Japan from 2004 to 2009. He was born in Asenovgrad.

All content from Kiddle encyclopedia articles (including the article images and facts) can be freely used under Attribution-ShareAlike license, unless stated otherwise. Cite this article:
Blagovest Sendov Facts for Kids. Kiddle Encyclopedia.