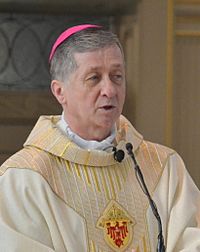 Blase Joseph Cupich (born March 19, 1949 in Omaha, Nebraska) is an American prelate of the Catholic Church. He is serving as the ninth Archbishop of the Archdiocese of Chicago.

He was the surprise choice of Pope Francis to succeed Cardinal Francis George as Archbishop of Chicago on September 20, 2014. Cupich had served as the sixth bishop of the Diocese of Spokane since 2010.

All content from Kiddle encyclopedia articles (including the article images and facts) can be freely used under Attribution-ShareAlike license, unless stated otherwise. Cite this article:
Blase J. Cupich Facts for Kids. Kiddle Encyclopedia.