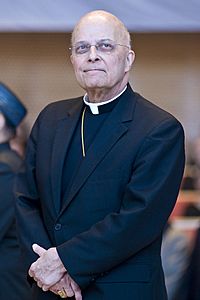 Francis Eugene George OMI (January 16, 1937 – April 17, 2015) was an American cardinal of the Catholic Church. He was the eighth Archbishop of Chicago. George resigned in September 2014 because of health issues. Blase J. Cupich succeeded him. From 2007 to 2010, he was President of the United States Conference of Catholic Bishops.

George was born in Chicago, Illinois. He was diagnosed with bladder cancer in 2012. George died in Chicago from the disease at the age of 78.

All content from Kiddle encyclopedia articles (including the article images and facts) can be freely used under Attribution-ShareAlike license, unless stated otherwise. Cite this article:
Francis George Facts for Kids. Kiddle Encyclopedia.