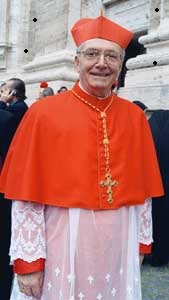 Agostino Cacciavillan (born 14 August 1926) is an Italian Cardinal of the Catholic Church and diplomat. He was born in Novale, Italy. He was Pro-Nuncio to Kenya, India, Nepal, and the United States between 1976 and 1998. He then served as President of the Administration of the Patrimony of the Apostolic See from 1998 to 2002. He was elevated to the cardinalate in 2001.

All content from Kiddle encyclopedia articles (including the article images and facts) can be freely used under Attribution-ShareAlike license, unless stated otherwise. Cite this article:
Agostino Cacciavillan Facts for Kids. Kiddle Encyclopedia.