Blizzards Run (also known as Blizzard Run or Blizzard's Run) is a tributary of Sechler Run in Montour County, Pennsylvania, in the United States. It is approximately 2.6 miles (4.2 km) long and flows through Mahoning Township and Danville. The watershed of the stream has an area of 1.87 sq mi (4.8 km2). The stream has two unnamed tributaries. Several businesses were historically located along it, and there was a spring nearby in the early 1900s. 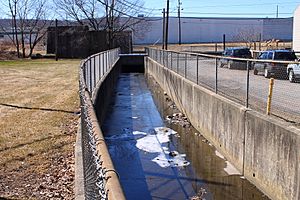 Blizzards Run begins in northeastern Mahoning Township. After less than a mile, it turns west and flows through Mechanicsville, receiving two unnamed tributaries from the right. Further on, it enters Danville, where it turns southwest. A short distance downstream, it turns south and reaches its confluence with Sechler Run.

Historically, there was a spring close to the corner of Mulberry Street and Pearl Street near Blizzards Run. A 1909 report noted that it had the potential to become polluted. The spring was little-used in the early 1900s. During freshets, the waters of the stream sometimes backed up into the spring. A reservoir is also located on the stream.

Blizzards Run is of natural origin.

In the 1800s, Blizzards Run experienced severe pollution. A number of drains connected to it and it served as an open sewer in this period. In the early 1900s, a plant belonging to the Hanover Brewing Company was based in the valley of Blizzards Run. A drain from a slaughterhouse also discharged into the stream during this period. The plant of the Danville Structural Tubing Company was situated at the mouth of the stream in the beginning of the 1900s.

In the early 1900s, Blizzards Run flowed under two railroads.

All content from Kiddle encyclopedia articles (including the article images and facts) can be freely used under Attribution-ShareAlike license, unless stated otherwise. Cite this article:
Blizzards Run Facts for Kids. Kiddle Encyclopedia.