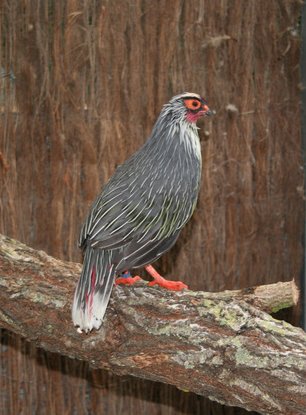 The Blood pheasant (Ithaginis cruentus) is a small, short-tailed pheasant. It fairly common in the eastern Himalayas. Its range is across the northern parts of India, Nepal, Bhutan and China. The total number of birds is slowly decreasing. For this reason the species has been evaluated as Least Concern by IUCN in 2009. It is the national bird of the former kingdom of Sikkim. The Blood pheasant is the only species in the Genus Ithaginis of the Pheasant family.

Blood pheasants like to live in coniferous or mixed forests and scrub areas near the snowline. They move their range depending on the seasons. They are found at higher elevations during the summer.

All content from Kiddle encyclopedia articles (including the article images and facts) can be freely used under Attribution-ShareAlike license, unless stated otherwise. Cite this article:
Blood pheasant Facts for Kids. Kiddle Encyclopedia.