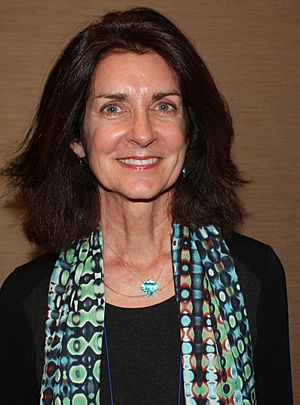 Elizabeth "Blue" Balliett Klein (born in 1955) is an American writer. Her first book is Chasing Vermeer. Chasing Vermeer made the Children's bestseller list in 2004. It is currently being made into a movie. In the story, two sixth graders help solve a mystery involving a Vermeer painting. The story has to do with pentominoes, patterns, and coincidences. The sequel to Chasing Vermeer is The Wright 3, a mystery centered around the Robie House designed by Frank Lloyd Wright and his talisman- a superstitious good luck object- that is a jade Japanese fish. This time, the two main characters, Petra and Calder, are joined by Calder's old friend, Tommy Segovia. The sequel was published in April 2006.

All content from Kiddle encyclopedia articles (including the article images and facts) can be freely used under Attribution-ShareAlike license, unless stated otherwise. Cite this article:
Blue Balliett Facts for Kids. Kiddle Encyclopedia.