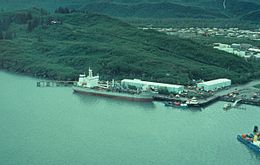 Aerial view of Blueberry Hill as it appeared in 1989. The marine facilities in the foreground have expanded considerably since this photo was taken.

Blueberry Hill is the largest in a system of hills that border the Valdez Bay. East of Blueberry Hill is Salmonberry or Civic Center Hill, named for the abundant wild salmonberries that grow on the northern shores of Ruth Pond. Southeast of the small boat harbor is Hippie Hill, named after the seasonal workers that inhabited the campground on Hippie Hill during the 1980s and 1990s. The Blueberry Hill network contains the Mineral Creek Islands east of town in the Valdez Tide Flats.

Blueberry Hill and all the hills in Blueberry Hill group are composed of metamorphic schist. Undisturbed exposed rock is visible on many of the cliff beaches surrounding the town of Valdez.

All content from Kiddle encyclopedia articles (including the article images and facts) can be freely used under Attribution-ShareAlike license, unless stated otherwise. Cite this article:
Blueberry Hill (Alaska) Facts for Kids. Kiddle Encyclopedia.