Bluff Park is the location of the Long Beach Museum of Art, as well as many older, well-maintained homes. There is also a Buddhist monastery that once was a Roman Catholic convent. 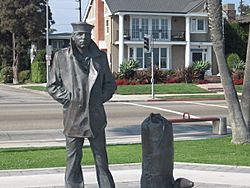 Bluff Park is a 25.8-acre (104,000 m2) park located between Ocean Blvd. and a tall bluff above the large sandy beach in the area. It is frequented by joggers, strollers, and dog walkers. Hobbyists with radio-controlled gliders like to use the natural updrafts of the bluff for their model planes. There is a replica of the Lone Sailor Statue in the park in honor of Long Beach's Naval heritage.

All content from Kiddle encyclopedia articles (including the article images and facts) can be freely used under Attribution-ShareAlike license, unless stated otherwise. Cite this article:
Bluff Park Facts for Kids. Kiddle Encyclopedia.