Bluffton, originally known as Shannon, is a village in Allen and Hancock counties in the U.S. state of Ohio. The population was 4,125 at the 2010 census. Bluffton is home to Bluffton University, a four-year educational institution affiliated with Mennonite Church USA. Bluffton is served by the Bluffton general aviation airport. Bluffton participates in the Tree City USA program.

There were 1,428 households, of which 29.5% had children under the age of 18 living with them, 53.4% were married couples living together, 8.1% had a female householder with no husband present, 2.5% had a male householder with no wife present, and 36.1% were non-families. 33.2% of all households were made up of individuals, and 18.3% had someone living alone who was 65 years of age or older. The average household size was 2.31 and the average family size was 2.95.

The village was founded in 1831 by Swiss Mennonites, German Reformists and Irish Catholics. It was originally named 'Crogan's Corners' after the postmaster. When the citizens chose to incorporate as a village, the Irish suggested the name 'Shannon' because of the green fields around the area. As there was already a village named Shannon in the state, the town was renamed Bluffton for the hilly terrain of the town site.

In 2011, Bluffton celebrated its 150th birthday with a series of town-wide events.

Bluffton is located approximately halfway between Lima and Findlay in northwest Ohio along Interstate 75.

One of the oldest companies in the village is the Bluffton Slaw Cutter Company, which has been making a unique food grater/cutter designed in 1915. The company makes several variations of the product using equipment of the same vintage as the design.

Modern manufacturing in Bluffton includes the international firm SumiRiko (formerly DTR), a cooperative venture between Duramax and Tokai Rubber of Japan, that makes rubber components for the auto industry. GROB Systems, a division of the German company GROB Group, produces machining and automation systems at its plant in Bluffton. Diamond Manufacturing of Bluffton produces metalwork and leases warehousing space.

The downtown area is anchored by the 19th century town hall and includes a local farmers market on Saturday mornings from May through October. With an average of 20 vendors, shoppers can choose from local foods and produce, as well as potted herbs, annuals, perennials, shrubs, and trees.

Ten Thousand Villages is a fair-trade retailer that was founded in Bluffton. The shop sells products made by artisans in developing countries.

The Shannon Theatre is a movie theater in the downtown area. Right next door is the original Shirley's Gourmet Popcorn, a franchise founded in Bluffton after people came to the theater just to buy popcorn. Other leisure opportunities are the Bluffton University nature preserve, Motter Metro Park, Bluffton Family Recreation Center, a bike and pedestrian pathway, and Southgate Lanes. 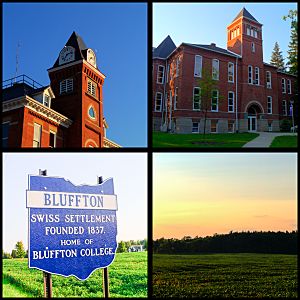 A Collage of Bluffton, Ohio

Bluffton is home to Bluffton University, a four-year educational institution affiliated with the Mennonite Church USA.

All content from Kiddle encyclopedia articles (including the article images and facts) can be freely used under Attribution-ShareAlike license, unless stated otherwise. Cite this article:
Bluffton, Ohio Facts for Kids. Kiddle Encyclopedia.