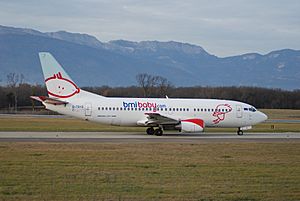 Bmibaby Limited known as bmibaby.com was a British low-cost airline. It flew to places in the UK and Europe from its bases at Belfast City, Birmingham and East Midlands airports. It was owned by British Midland International, which itself is owned was Lufthansa. In April 2012, BMI was bought by the International Airlines Group and the airline, along with bmibaby, stopped flying.

Bmibaby had a United Kingdom Civil Aviation Authority Type A Operating Licence. It was allowed to carry passengers, cargo and mail on aircraft with 20 or more seats.

All content from Kiddle encyclopedia articles (including the article images and facts) can be freely used under Attribution-ShareAlike license, unless stated otherwise. Cite this article:
Bmibaby Facts for Kids. Kiddle Encyclopedia.