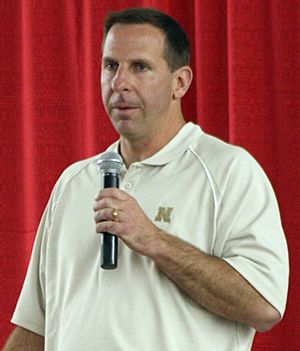 Mark "Bo" Pelini (born December 13, 1967) is the head football coach at the University of Nebraska–Lincoln. Before that, he was the defensive coordinator for the LSU Tigers. On December 2, 2007, one day after coaching in the 2007 SEC Championship Game, Pelini was named as head coach at Nebraska by athletic director Tom Osborne.

All content from Kiddle encyclopedia articles (including the article images and facts) can be freely used under Attribution-ShareAlike license, unless stated otherwise. Cite this article:
Bo Pelini Facts for Kids. Kiddle Encyclopedia.