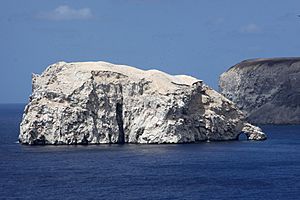 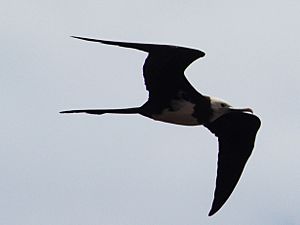 The island is the main breeding site of the Ascension frigatebird

Boatswain Bird Island, also spelt Boatswainbird Island, is a small island some 270 metres (300 yd) off the east coast of Ascension Island in the South Atlantic Ocean with an area of approximately 5.3 ha (13 acres). It is administered from Georgetown on Ascension, which is part of Saint Helena, Ascension and Tristan da Cunha, an overseas territory of the United Kingdom. Boatswain Bird Island should not be confused with the nearby, much smaller, Boatswain Bird Rock, only about 10 by 5 metres (33 by 16 ft) in size, located 570 metres (620 yd) south-east of the island and 360 metres (390 yd) north-east of the coast of Ascension. The southern coast of the island has an impressive natural arch.

There are thousands of inhabitants on this tiny island, all of which are birds, which give the island its white colour. Among the many seabirds nesting there are boobies, petrels, noddies, as well as the tropicbirds (boatswain birds) for which the island is named.

The island is the home of the majority of Ascension's birds due to rats (accidentally introduced by passing ships) and then cats (introduced to catch the rats, as well as pets) eating the birds and their eggs on Ascension. Since the mid-1990s there has been a feral cat eradication program, alongside a rat eradication program, to encourage the birds back to the main island.

The island has been identified as an Important Bird Area (IBA) by BirdLife International as a breeding site for seabirds. Birds for which the IBA is significant include Madeiran storm petrels (1,500 breeding pairs), red-billed tropicbirds (500 pairs), white-tailed tropicbirds (1,000 pairs), Ascension frigatebirds (6,000 pairs), masked boobies (1,300 pairs) and black noddies (5,000 pairs).

All content from Kiddle encyclopedia articles (including the article images and facts) can be freely used under Attribution-ShareAlike license, unless stated otherwise. Cite this article:
Boatswain Bird Island Facts for Kids. Kiddle Encyclopedia.