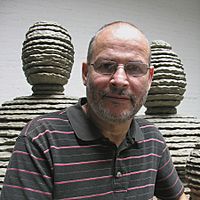 Boaz Vaadia (November 13, 1951 – February 25, 2017) was an Israeli-American artist and sculptor. He was born in Gat Rimon, Israel. He worked primarily in stone and later by casting in bronze. He said that his work is based on the power of natural materials and the relation of human beings to that power.

Vaadia died in Brooklyn, New York from pancreatic cancer on February 25, 2017, aged 65. He was survived by his wife Kim and two daughters.

All content from Kiddle encyclopedia articles (including the article images and facts) can be freely used under Attribution-ShareAlike license, unless stated otherwise. Cite this article:
Boaz Vaadia Facts for Kids. Kiddle Encyclopedia.