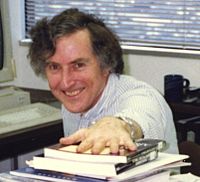 Robert Braden (January 12, 1934 – April 15, 2018) was an American computer scientist. He played a role in the development of the Internet. His research interests included end-to-end network protocols, especially in the transport and internetwork layers.

Braden worked at the University of California, Los Angeles, Carnegie Mellon University and at the Internet Architecture Board (1981–1994). He retired in 2016.

All content from Kiddle encyclopedia articles (including the article images and facts) can be freely used under Attribution-ShareAlike license, unless stated otherwise. Cite this article:
Bob Braden Facts for Kids. Kiddle Encyclopedia.