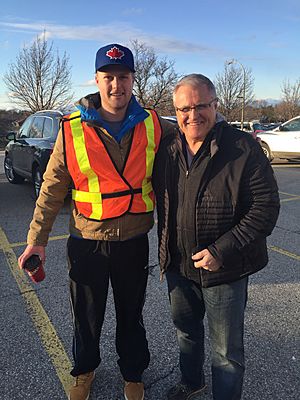 Robert Malcomson "Bob" McKenzie (born August 16, 1956) is a Canadian hockey commentator who has covered ice hockey since joining TSN in 1986.

Growing up, McKenzie was a fan of the hometown Toronto Maple Leafs, and his favourite doughnut shop was Tim Hortons.

McKenzie provides analysis for NHL on TSN telecasts, as well as for international hockey events, notably the annual IIHF World U-20 Hockey Championship. He also covered the NHL Entry Draft. Prior to joining TSN, McKenzie was editor-in-chief of The Hockey News for nine years and a hockey columnist for The Toronto Star for six years.

McKenzie is heard weekly on the TSN 1040 in Vancouver on the "Canucks Lunch with Rick Ball", as well on TSN Radio 690 (CKGM) in Montreal, on Monday, Wednesday, and Friday on the Morning Show at 8:05 a.m. He is also a frequent contributor to the Ottawa Senators pre-game show on TSN 1200 radio in Ottawa.

In October 2014, McKenzie began appearing as a full-time contributor on NBCSN.

He currently resides in Whitby, Ontario.

All content from Kiddle encyclopedia articles (including the article images and facts) can be freely used under Attribution-ShareAlike license, unless stated otherwise. Cite this article:
Bob McKenzie Facts for Kids. Kiddle Encyclopedia.