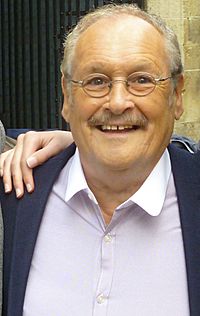 Robert Harper (28 January 1944 – 28 October 2020), known professionally as Bobby Ball, was an English comedian, actor and singer. He was best known being part of the comedy duo Cannon and Ball, with Tommy Cannon. They both hosted The Cannon and Ball Show for nine years between 1979 and 1988.

He later starred in Last of the Summer Wine, Heartbeat and Not Going Out. In 2005, Ball took part in the fifth series of I'm a Celebrity...Get Me Out of Here!.

Ball was born in Oldham, Lancashire. He died on 28 October 2020 at a hospital in Blackpool, Lancashire from COVID-19, aged 76.

All content from Kiddle encyclopedia articles (including the article images and facts) can be freely used under Attribution-ShareAlike license, unless stated otherwise. Cite this article:
Bobby Ball Facts for Kids. Kiddle Encyclopedia.