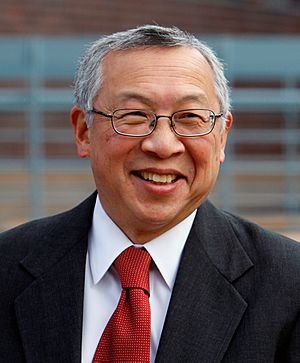 Bobby Fong (1950 – September 8, 2014) was an American academic and educator. He was the 20th President of Butler University in Indianapolis, Indiana from June 1, 2001 until 2011. He was later the 15th President of Ursinus College in Collegeville, Pennsylvania from July 1, 2011 until his death.

Fong was born in Oakland, California. His parents were Chinese immigrants. He graduated from Harvard University with a degree in English. He was married to Suzanne Fong.

Fong died from an aneurysm on September 8, 2014 in Collegeville, Pennsylvania, aged 64.

All content from Kiddle encyclopedia articles (including the article images and facts) can be freely used under Attribution-ShareAlike license, unless stated otherwise. Cite this article:
Bobby Fong Facts for Kids. Kiddle Encyclopedia.