Bodenseekreis ("Lake Constance district") is a rural district (Landkreis) in the southeast of Baden-Württemberg, Germany. Neighboring districts are Konstanz, Sigmaringen and Ravensburg, and in Bavaria, Lindau district. To the south, on the opposite shores of Lake Constance (German: Bodensee), lies Switzerland. The capital is Friedrichshafen.

The district was created in 1973, when the previous district Tettnang was merged with most of the district Überlingen. 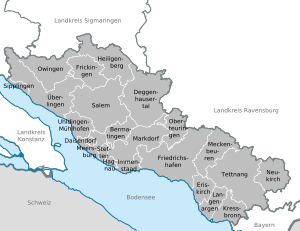 Towns and municipalities in Bodenseekreis

All content from Kiddle encyclopedia articles (including the article images and facts) can be freely used under Attribution-ShareAlike license, unless stated otherwise. Cite this article:
Bodenseekreis Facts for Kids. Kiddle Encyclopedia.