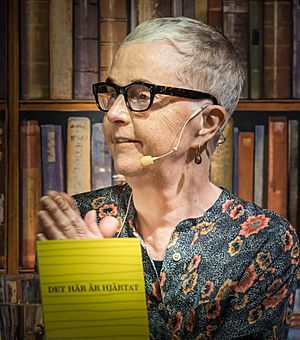 Bodil Malmsten (19 August 1944 – 5 February 2016) was a Swedish poet and novelist. She wrote over fifteen books from 1977 to her death. Her best known book was the English translation of Priset på vatten i Finistère (The Price of Water in Finistère) which was awarded Book of the Week by BBC Radio 4.

Malmsten was born in Bjärme, Jämtland. Her grandfather was designer and architect Carl Malmsten (1888–1972).

Malmsten died from cancer on 5 February 2016 in Stockholm. She was aged 71.

All content from Kiddle encyclopedia articles (including the article images and facts) can be freely used under Attribution-ShareAlike license, unless stated otherwise. Cite this article:
Bodil Malmsten Facts for Kids. Kiddle Encyclopedia.