The Boeing 80, sometimes called the Boeing Model 80 or just the Model 80, was an American airliner. It was a biplane with three engines. The Boeing 80 was built by the Boeing Airplane Company. It could carry mail and passengers.

Boeing decided to make a plane to carry passengers. In 1928 it designed the Model 80. The Boeing 80 could carry 12 people. The pilots sat in a cockpit in front of the passengers.

The Boeing 80 first flew for Boeing Air Transport on September 20, 1928. It soon turned out to be successful. The Boeing 80A started being used in September 1929.

In May 1930, Boeing Air Transport hired eight female flight attendants. They first flew on May 15. The Boeing 80 and 80A were used until the Boeing 247 replaced them in 1934.

One Boeing 80A was found in a dump at Anchorage Airport in 1960. It was fixed up and it is now in the Museum of Flight in Seattle. 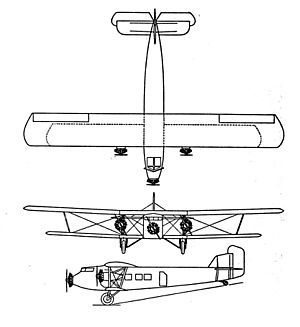 All content from Kiddle encyclopedia articles (including the article images and facts) can be freely used under Attribution-ShareAlike license, unless stated otherwise. Cite this article:
Boeing 80 Facts for Kids. Kiddle Encyclopedia.