Bogolong iron mine and blast furnace facts for kids 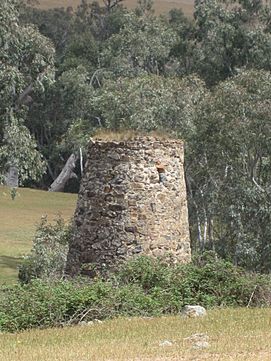 The Bogolong iron mine and blast furnace is an abandoned iron mining and smelting site, near Bookham, New South Wales, Australia. Located in an area known best for sheep grazing and wool, it has been called Australia's 'forgotten furnace'.

In 1874, the blast furnace produced a small amount of pig iron—sufficient to allow its testing—that was smelted from iron ore mined nearby. Plans to operate commercially did not eventuate. It is significant as one of the only three remaining ruins of 19th-Century iron-smelting blast furnaces in Australia, and the only one in New South Wales.

The abandoned iron mine and the ruin of the blast furnace is located alongside a part of Jugiong Creek—a part that was considered part of Bogolong Creek in the 19th-Century—approximately 3 km north of the small settlement of Bookham. The site is on the north side of the first of two 180-degree bends in Jugiong Creek, where the stream changes direction from north to south before resuming its generally northward flow.

In the early 1870s there was a sharp increase in the price of iron. This encouraged several iron-smelting ventures in Australia, as locally smelted iron became cost competitive. The high-prices were short-lived; by the late 1870s, imported pig-iron—shipped as ballast in sailing ships—became relatively cheap once again.

During the 19th-century, a name for the entire area around Bookham was Bogolong. By the 1870s, the Main Southern Railway was being extended and, by 1876, would reach Binalong, which is north of the Bogolong site, providing access to Sydney and Melbourne.

A 19th-Century analysis of the iron ore gave a result of 52% metallic iron. The ore was hematite. It was reported that the ore was superior to that of the Fitzroy Iron Works. The iron ore deposit was described as, "Specular hematite of excellent quality". It was noted that, "The deposit is probably of considerable extent, but its dimensions cannot be correctly ascertained on account of the bed-rock in the vicinity being hidden from view by alluvium".

In late 1873, the newly established Bogolong Iron Mining Company (with 4,800 shares and a paid up capital of £1200) took a lease over 200-acres (80-hectares) of land alongside what was then known as Bogolong Creek, now the upstream portion of Jugiong Creek. The owners of the company were two local men from Bookham (Robert Stacey and George Rees), four investors from Albury (Richard Thomas Blackwell, Andrew Edward Heath, Thomas Affleck, and John Charles Gray), and the company's manager, Thomas Barrett Blackwell, from Daylesford.

From July 1873, seven workers were employed in mining iron ore at the site. A blast furnace was constructed adjacent to the mine. Five pigs of iron were cast on 31 March 1874. There were immediate problems caused by the fire-brick lining failing under the intense heat of the furnace. Operations ceased, while repairs were made. Four more pigs were cast on 20 May 1874. All nine of the iron pigs that had been made were sent to Melbourne to ascertain product quality. There was no further iron smelting at the site. Plans for a larger company—the Bogolong Charcoal Ironworks Company—to operate commercially, never eventuated and the furnace and mine were abandoned.

In August 1875, it was reported that English capitalists, after testing a sample of Bogolong ore, were interested in buying the mine, but nothing came of those plans. 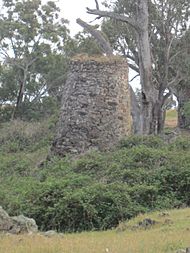 Side-view of Bogolong Blast Furnace, from public land alongside Illalong Road near Bookham, N.S.W. (October 2019). The base of the furnace is hidden by blackberry bushes.

The blast furnace stood 6m high, a very small furnace even by the standards of its time. It had a square base, three tuyeres and an arched hearth (on the southern side) through which iron and slag were tapped onto an adjacent casting floor. The outer shell of the furnace was made of local stone. The inner lining was of locally-made fire bricks. The space between the outer shell and the inner lining was packed with clay. The fire bricks proved completely unsuitable and failed rapidly once smelting began; that being a reason that so little iron was produced.

The furnace was a cold-blast furnace with the air-blast being provided by a 10 h.p. steam engine driving an 'American blower'. There was a level timber trestle bridge from the top of the slope to the top of the furnace, over which the raw materials were moved by wheelbarrow before being added to the furnace.

The fuel used was charcoal made from locally-available hardwood. Limestone—used as a smelting flux—was mined locally, reportedly from within the company's lease, although its precise source is unknown today.

The iron pigs produced in March and May 1874 were of high quality; when examined in Albury, the first five pigs made were reportedly "far superior to that of the Ilfracombe Iron Mine"—an iron-making venture in Northern Tasmania that had carried out a trial smelting of its ore in Melbourne in 1872.

The remnants are on private property and not accessible to the public, but are partially visible from adjoining public land on the western side of Illalong Road, the road between Bookham and Binalong. 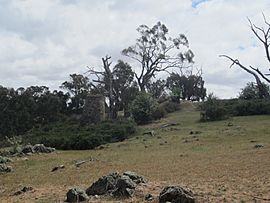 View of the Bogolong mining and smelting site, from public land alongside Illalong Road, near Bookham, N.S.W. (October 2019).

The mine site—an open quarry—extends to the top of a slope. Piles of iron ore and limestone, mined during 1873–1874, remain midway between the mine and the blast furnace site.

The blast furnace ruin, casting floor and some other remnants are nearby on a piece of flat land—a man-made terrace—that is part way down a southward-facing slope that ends at a wide sandy stretch of Jugiong Creek. By 1993, there was nothing remaining of the blowing equipment or other machinery. The outer shell of the furnace ruin was still complete in 1993, but the fire bricks of the inner lining largely had been pilfered over the years. However, since 1993, the ruined structure has become partially overgrown by blackberry bush and some structurally important timber lintels have rotted. By 2010, robbing of stonework from the top of the structure had weakened it structurally, leaving it under threat of collapse. The furnace was still standing in October 2019 (refer to photographs).

The furnace is one of only three remaining ruins of 19th-Century iron-smelting blast furnace structures in Australia and the only one in New South Wales. The site has heritage recognition, but is not being conserved or managed as a heritage site. It remains the 'forgotten furnace'.

All content from Kiddle encyclopedia articles (including the article images and facts) can be freely used under Attribution-ShareAlike license, unless stated otherwise. Cite this article:
Bogolong iron mine and blast furnace Facts for Kids. Kiddle Encyclopedia.