Bonkyll Castle (also variously spelled Bonkyl, Boncle, Buncle, Bunkle or Bonkill) was a medieval fortress situated in the historic Scottish county of Berwickshire, from 1973 the Scottish Borders. It is situated 4 miles north of Duns and 4 miles south of Grantshouse. Few traces survive and the site is protected as a scheduled monument. It was the seat of a junior branch of the Stewart family, known as "Stewart of Bonkyl", from which was descended in another junior branch "Stewart of Darnley", the paternal family of King James I & VI of Scotland and England.

Excepting the motte on which it stood, and a small section of curtain wall there is little left of the structure of what was once a very powerful castle of enceinte. 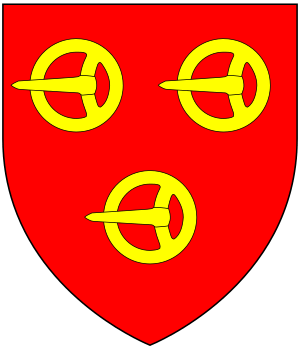 The seat of the powerful barony of Bonkyll, the castle originally belonged to the de Bonkyll family, which took its name. Their canting arms were three buckles. The last in the male line was Sir Alexander de Bonkyll, whose daughter and heiress Margaret de Bonkyl married Sir John Stewart (d.1298). 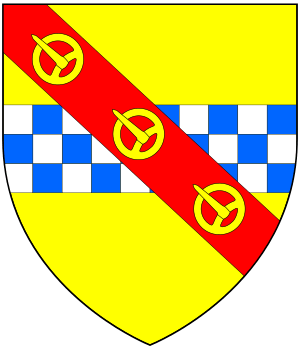 Arms of John Stewart of Bonkyll (d. 1298): Arms of Stewart, Hereditary High Steward of Scotland differenced by overall a bend gules charged with three buckles or, the buckles being the canting arms of the de Bonkyll family

From the Countess Margaret's death in 1417 Bunkle passed to her son George Douglas, 1st Earl of Angus, with whose descendants it remained until the late 18th century.

George Douglas, Master of Angus, lord of the barony of Bonkill, made several charters while residing at the castle. The property passed to his widow Elizabeth Drummond as part of her jointure. Bunkle subsequently belonged to Margaret Tudor as Countess of Angus, and was held by George Douglas of Pittendreich, who had been Bailie of Bonkill since 1514. Her husband Archibald Douglas, 6th Earl of Angus was at Bonkill on 28 November 1522. In August 1523 the Earl of Surrey suggested that if Margaret Tudor came to Bunkle with her silver plate and jewels, pretending to intercede for the people of the Scottish borders, he could convey her safely to England.

The poet and laird Patrick Hume of Polwarth was bailie of Bonkyll in 1593 for James VI and he was instructed to use the rents from the houses in the mains of Bonkyll to pay the wages of the king's huntsman John Acheson.

In the late 18th century ownership of Bunkle Castle passed to the Earls of Home.

A popular Berwickshire rhyme refers to the medieval strengths of Bonkyll and the nearby fortresses of Billie Castle, and Blanerne Castle referring to their construction in the time of David I:

Bunkle, Billie and Blanerne
Three castles strong as airn
Built when Davie was a bairn
They'll all gang doon,
Wi' Scotland's Croon
And ilka ane shall be a cairn

All content from Kiddle encyclopedia articles (including the article images and facts) can be freely used under Attribution-ShareAlike license, unless stated otherwise. Cite this article:
Bonkyll Castle Facts for Kids. Kiddle Encyclopedia.