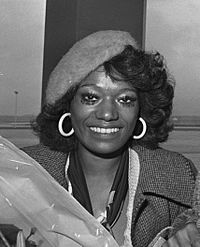 Patricia Eva "Bonnie" Pointer (July 11, 1950 – June 8, 2020) was an American singer. She is most notable for being a member of the R&B singing group The Pointer Sisters. She also had her own solo hits after leaving the group in 1977. Her disco cover of The Elgins' "Heaven Must Have Sent You" became a U.S. Top 20 pop hit in 1979. She was born in Oakland, California.

All content from Kiddle encyclopedia articles (including the article images and facts) can be freely used under Attribution-ShareAlike license, unless stated otherwise. Cite this article:
Bonnie Pointer Facts for Kids. Kiddle Encyclopedia.