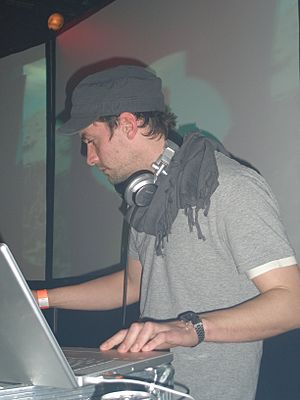 Simon Green (born 30 March 1976), known as Bonobo, is a British electronic musician. He released his first album Animal Magic in 2000 on the record label Tru Thoughts. It was then released again by Ninja Tune in 2001. He became successful in 2013 when he released his fifth album The North Borders. Erykah Badu sung on one of the songs on the album. Bonobo's song "Ketto" was used in the Citroën C4 Picasso car advertisement in 2007. He lives in New York.

All content from Kiddle encyclopedia articles (including the article images and facts) can be freely used under Attribution-ShareAlike license, unless stated otherwise. Cite this article:
Bonobo (musician) Facts for Kids. Kiddle Encyclopedia.