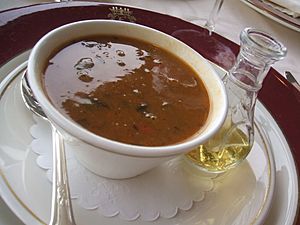 Bookbinder's soup, also known as snapper soup, is a type of seafood soup originating in the United States at Old Original Bookbinder's restaurant in Philadelphia. The original soup is a variety of turtle soup made with typical stew vegetables such as tomatoes, carrots, celery, bell peppers, onions, leeks, mushrooms, and garlic. It is commonly made with common snapping turtle meat. The soup spread to other places, such as the Drake Hotel in Chicago, where the turtle meat is replaced with red snapper, a fish chosen likely because of the similarity of the name. The Chicago Tribune published a version of the recipe given to them by the executive chef at the Drake.

All content from Kiddle encyclopedia articles (including the article images and facts) can be freely used under Attribution-ShareAlike license, unless stated otherwise. Cite this article:
Bookbinder soup Facts for Kids. Kiddle Encyclopedia.